Day1- Bengmelea temple & Tonle Sap Lake Sunset Tours.
Pick up 9:30 am explore single temple of Beng Mealea, which temple built the King established Angkor Wat, it is impressive of its unrestored and overrun by nature, vying,  and lunch at the local restaurant, the afternoon that heading to visit the floating/ stilted villages in community of Kampong Kleang and its dock taking the boat  to see floating, surface of larges lake in South Asia at Tonle Sap seeing sunset to hotel after this transfer to Siem Reap hotel.

Day2- Angkor Wat Temples Sunrise Tours.
Discover the city of stone Angkor Wat complex, explore temple of Khmer empire from 9th -13th century.  You will pick up 5:00 AM from the hotel in central of Siem Reap city heading  Angkor Wat for sunrise reflection of the pound then process to learn the caving history on the wall of the temple in the first level and send gallery and top center tower of the body temple its self then continue Southgate of Angkor Thom shortstop for Photo then center of Angkor Thom, you explore many temples such as Bayon with smile faces of Buddha, Baphoun, Terrace of Leper King, Royal enclosure wall, Phimeanaka, Terrace of leper king, continue to other temples Via victory at Eastern of Angkor Thom, Pass by small temples such Thomanon, Choa Say Teavoda, Takeo and going to Taprohm the famed by root top tree overrun wall and sanctuary of the temple recalled Tom raider temple or Banteay Dkei/ Srasrang to hotel end of day.

Day3- Phnom Kulen Park and Ground Temples Tours.
Pick up 8:30 AM heading to Kulen Mountain, it's considered a secret mountain in Cambodia and is a special religious significance to Hindus and Buddhists, the first visit river of one thousand Lingas which caved at riverbed of Shiva God then continue hilltop reclining Buddha with incredible landscape after walking to the first waterfall 4metters then go down highest of Shiva waterfall about 33 meters and Luch at local restaurant going to lady pint color sunstone with finest Banteay Srei to and Preah Khan to transfer to Siem Reap city hotel at the end of the day tours.

Day3- Preah Vihear Hilltop Temple - Koh Ker group Tours.
We explore remote temple lonely on hilltop temple on Dangrek mountain,  Preah Vihear temple, built at top of Preah Vihear mountain, it's dedicated to Shiva, The temple is composed of a series of sanctuaries and dates back to the first half of the 11th century and it's adapted to the natural environment and the religious function of the temple, as well as for the exceptional quality of its stone carved ornamentation. this temple hilltop site to be able only 4X4 or pick up truck and motorbike at hill stations.
Afternoon, we heading to other an ancient city of the Khmer empire at Koh Ker was briefly the capital of the whole empire (928–944 AD). Jayavarman IV enforced an ambitious building program. It's jungle filled region that is sparsely populated more than 180 sanctuaries have found in a protected area of 81 square kilometers. We will do most visitable such as Prasat Pram, Prasat Thom pyramid, and ling group temples then heading to back Siem Reap to hotel end of the day trip.

Day4- Siem Reap to Battambang Transfer Tours.
Today, departure from  the hotel at 8:00 AM stopping  at silk farm to see how silk processing by Phouk drive throughout countryside villages and pass villages rice paddy field to explore to the colonial building in city Battambang such central market Phsar Nut, Wat Dam Rei Sor then Sampouv mountain and Killing cave with hilltop views of Battambang city and bat’s cave fly out at late evening to the hotel. Overnight in Battambang.

Day6: Kampong Chhnang To Phnom Penh Tours
Today pick up 8:30 am visit Phum Chong Khos the riverside village of Chong Koh villages to life along the river of Kampong Chhnang then heading the Udong the former Royal family villages, Udong Mountain is northwest of Phnom Penh. It's the royal capital from the 16th to the 19th centuries. The mountain’s two mounds are connected by a ridge and dotted with stupas and shrines dedicated to former kings Chedi Mouk Pruhm ( stupa with five faces), it is the burial site of King Monivong. The ruins of Arthrosis Temple house a large golden Buddha. After this historical site transfer to hotel in Phnom Penh enjoy your evening free time.

Day7- Phnom Penh Tours City Attractions Sites.
Morning time, We explore around Phnom Penh central city to Toul Sleng S21 prison the genocide museum from the Khmer Rouge regime then heading to Choeung Ek it is the site of a former orchard and mass grave of victims of the Khmer Rouge - killed between 1975 and 1979, it is best-known of the sites known as the Killing Fields, where the Khmer Rouge regime executed over one million people, then lunch riverside of Phnom Penh, Afternoon explore the Royal Palace the complex of buildings which serves as the royal residence of the king. The Royal Throne Halls stands the Silver Pagoda enclosure, other known as Emerald Buddha. The Pagoda's steps are crafted from countries marble, within the throne room, the regal floor consists of more than 500 solid silver blocks. The totally calculated, they weigh nearly six tones. Displayed around the room, surrounding the main area, standing plush presents from foreign dignitaries other attraction, Wat Phnom, National museum to Hotel end of the day.

Day8- Phnom Penh Hotel to Phnom Penh Airport.
Moring, you're relaxing at the hotel and free time or self-explore by foot.
still, time transfer out to Phnom Penh airport at the end of the trip.

Air-conditioned vehicles with the licensed English speaking driver or tour guide on your selection.

For safe or security reason your reservation or booking on a selected long days trip or multi ways transfer and sightseeing tour of services the amount paid more than USD499 the clients must pay us by bank transfer % 50 a non-refundable deposit of $179 is required within three days of receiving confirmation of availability.

You will receive a confirmation email within 48 hours of emails exchange on your reservation. The balance of your payment must be received at least 25 days prior to trip departure. If the balance is not received, your reservation and the full deposit will be forfeited.

All prices are listed in U.S. dollars and are based on double occupancy ( shared with another trip attendee or friend/partner) or for private taxi transfer and sightseeing where specified. Prices DO NOT include hotels, meals, flights.

What currency I should pay?

All costs are listed in U.S. dollars and are based on double occupancy ( group sites and trip attendee or partner/family friend) or for private taxi transfer and sightseeing where specified. Prices DO NOT include hotels, meals, flights.

Travel insurance & Our Recommendation Our Guests Buy Their Insurance.

Insurance, Health, and Release of Liability

Insurance It is the sole responsibility of each guest to obtain adequate medical and travel insurance that covers the individual for all medical treatment while traveling abroad.

Though not needed to attend one in all your visits, larid Travel won't be control liable in any means for your failure to buy adequate insurance whereas traveling abroad.

Our service won't be included"

Tern Travel is not liable for any direct or indirect damage, injury, life damage, loss, accident, delay, inconvenience, or irregularity of any kind which may be caused by any act or omission beyond its control, including, without limitation, any willful or negligent act, failure to act, or breach of contract of any third party. 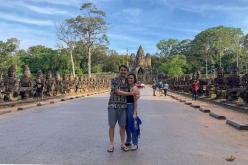 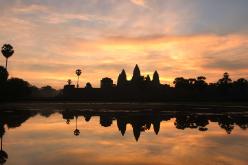 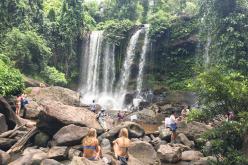 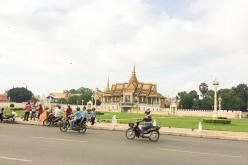 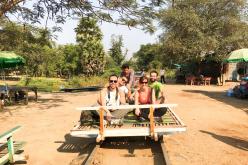 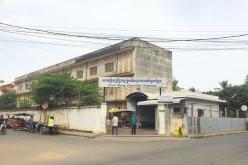 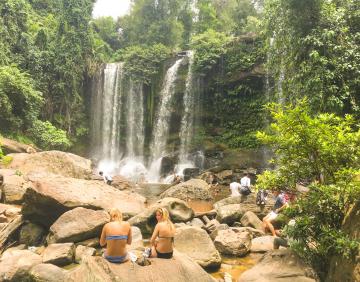 Explore  Cambodia the most popular attractions such as the main temples majestic spires of Angkor Wat temples and delt capital of Phnom Penh history, market, and attractions, enjoy relaxing on white beach Sihanoukville of the southern line of Cambodia and end at Phnom Penh Airport. [...] 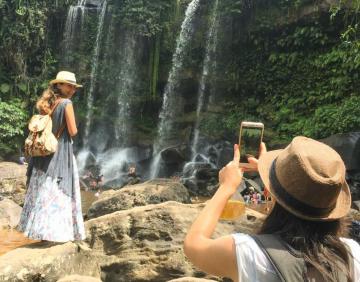 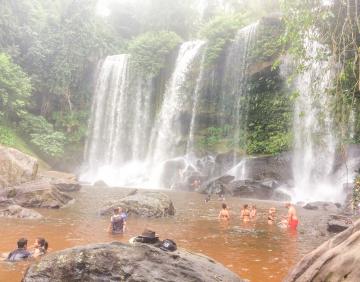 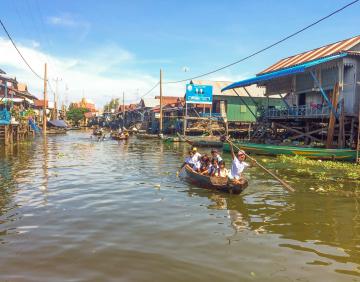